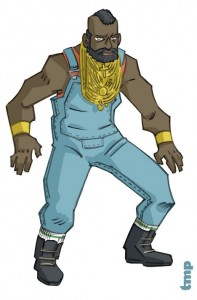 I suspect B.A. would pity me for my shoddy respect of his fighting skills.

You can only really appreciate that you’ve done something wrong when you test it in anger – and I can see after a couple of sessions that I haven’t figured B.A. Baracus out right. It isn’t a problem – indeed, I like a challenge and the prospect of digging through the Cypher System.

In play, B.A. struggled to hit people. That’s not because he didn’t hit ’em, but that he never got the chance.

He has a low Speed and no Speed Edge – and that’s two-thirds of the deal in combat. Yes, he has Might aplenty, but that’s only any good if you hit first. Low Speed means low Defence, so the goons got the drop on the big man and before long had him pinned down and knocked out.

I need B.A. to have more of the brick outhouse about him when it comes to taking damage. He might not duck and dive, but he shouldn’t get knocked down quite so easily. I don’t want him to be fast – he’s a lumbering pummeller.

I suspect I just need to review the balance of abilities derived from Focus and Descriptor and come to some new arrangement. I’ll find the right balance in the end – then update the character and upload it into the existing Cypher System A-Team folder.