The Lands of Legend

The Lands of Legend 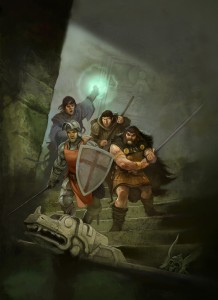 I could hardly believe my eyes… Dave Morris and Oliver Johnson are reprinting Dragon Warriors in a hardback volume under the Mongoose Publishing Flaming Cobra imprint. Originally published in the 80s in six separate paperback volumes, Dragon Warriors rode the wave of the popularity of Fighting Fantasy and Lone Wolf, bringing fantasy adventures to the shelves of the common bookstore.

Interjection #1: Well, that might have been true in 2008, when I wrote this entry, but now… not so much. While Mongoose carried the torch for a while, it fell by the wayside and the property changed hands (more than once, I think, passing onward via Magnum Opus). Right now, Dragon Warriors lies in the hands of Serpent King Games – and the link to Dragon Warriors has been updated accordingly.

I collected ‘Dragon Warriors’ avidly, picking up each new volume the moment it appeared.

Interjection #2: OK, that might not be true. I actually spent a lot of time and effort getting my parents or, more likely, my grandmother to buy the books for me. The books would surface in the local branch of W H Smith and I would stare at it longingly. I would wait until the adult with me roamed close by and then would stare at my prize with a wistful look. Sometimes it worked. Sometimes, I would have to wait until after I had a birthday – or might need to play the long game until hypnotic suggestion finally got my point across.

Heck, I even own a copy of Sword of the Life (Chronicles of the Magi) – a novel based in the realms of ‘Dragon Warriors’ written by Dave Morris – and collected a copy or two from the ‘Blood Sword‘ series – which provided a sort of party-based ‘Fighting Fantasy’ experience.

I loved the series… seriously loved it. And I played it several times.

Interjection #3: Several times rates very highly for me. I never seem to have enough time in the world to play something more than just several times. The only exception – MERP. Middle Earth Role Playing got some serious air time in my youth and is the nearest I have ever got to one of those campaigns I sometimes hear about. You know, those ones where people say they have played D&D for twenty years and taken their adventuring from hapless stripling to undefeatable demi-godhood. Only difference – my MERP campaign ended with the complete destruction of the whole group at the hands of a mad Elf with a corrupted magical sword.

Great little adventures and a simple system made for a thoroughly enjoyable role playing experience for beginners and veterans alike. I’m seriously looking forward to getting my hands on a copy of the whole game in one volume. October cannot come around too soon… though, I suspect this will likely become a Christmas present.

Interjection #4: Despite my enthused protestations, I never actually picked up a copy of the game. I still plan to get one at some point. I think I downloaded the PDF – but, sometimes you have to have the physical book to make the experience. Really make it. Perhaps I’ll manage to grab a copy at a Bring & Buy sale or something. I can’t resist.