The A-Team do The Harker Intrusion

The A-Team do The Harker Intrusion 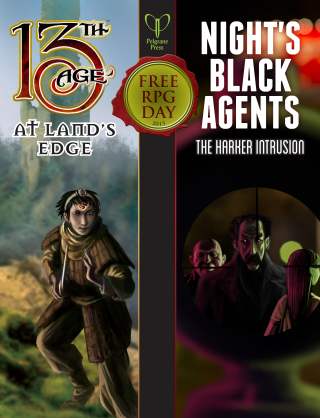 In actuality, I didn’t have the opportunity to participate directly other than getting a copy of the fine Quick Start material Pelgrane Press has on offer. That’s a shame. I have always enjoyed the chance to run a game this time of year – although, oddly enough, it always seems to attract the same players. I’m not certain the day quite manages to achieve what it sets out to.

I picked up the Quick Start from Pelgrane for the Night’s Black Agents because I’m really quite a fanboy of the Gumshoe system and looking forward to the imminent release of The Dracula Dossier. A lot of solid Quick Starts have come out over the last several years for Free RPG Day, and this is another one. I thoroughly recommend picking it up, for both the NBA content and the 13th Age adventure (which I’ll discuss another time, perhaps).

As it happens, I didn’t choose to run it with NBA in the end. I had other plans.

So, I have a short adventure intended for a game about espionage, conspiracy and vampires and a soon-to-be-released game engine for generic gaming goodness.

In the preview, I mentioned that the Cypher System presents four different Types of character – Warrior, Adept, Explorer and Speaker. For whatever reason, it seemed to me that these compared rather well with the division of skills within the classic structure of The A-Team. I’m generally quite good at this analogy lark and it actually seemed to hang together.

The A-Team by Deviant Artist Nightwing1975

The team and Character Types stack up well enough. The Explorer fills a role akin to a tracker or ranger, someone with a blend of intelligence and physical ability – or, in this case, John “Hannibal” Smith. The Speaker also opts for a blend of abilities, but errs on the side of the charismatic, using the strength of personality to sway opinion – very much Templeton “The Face” Peck territory.

While not a perfect fit necessarily on the surface, the Adept uses powers of deception, magic or manipulation of the mind to get his way. In a fantasy setting, the Adept works with magic. In a science fiction setting, it probably errs toward the psionic or gadgetry – akin to Numenera. 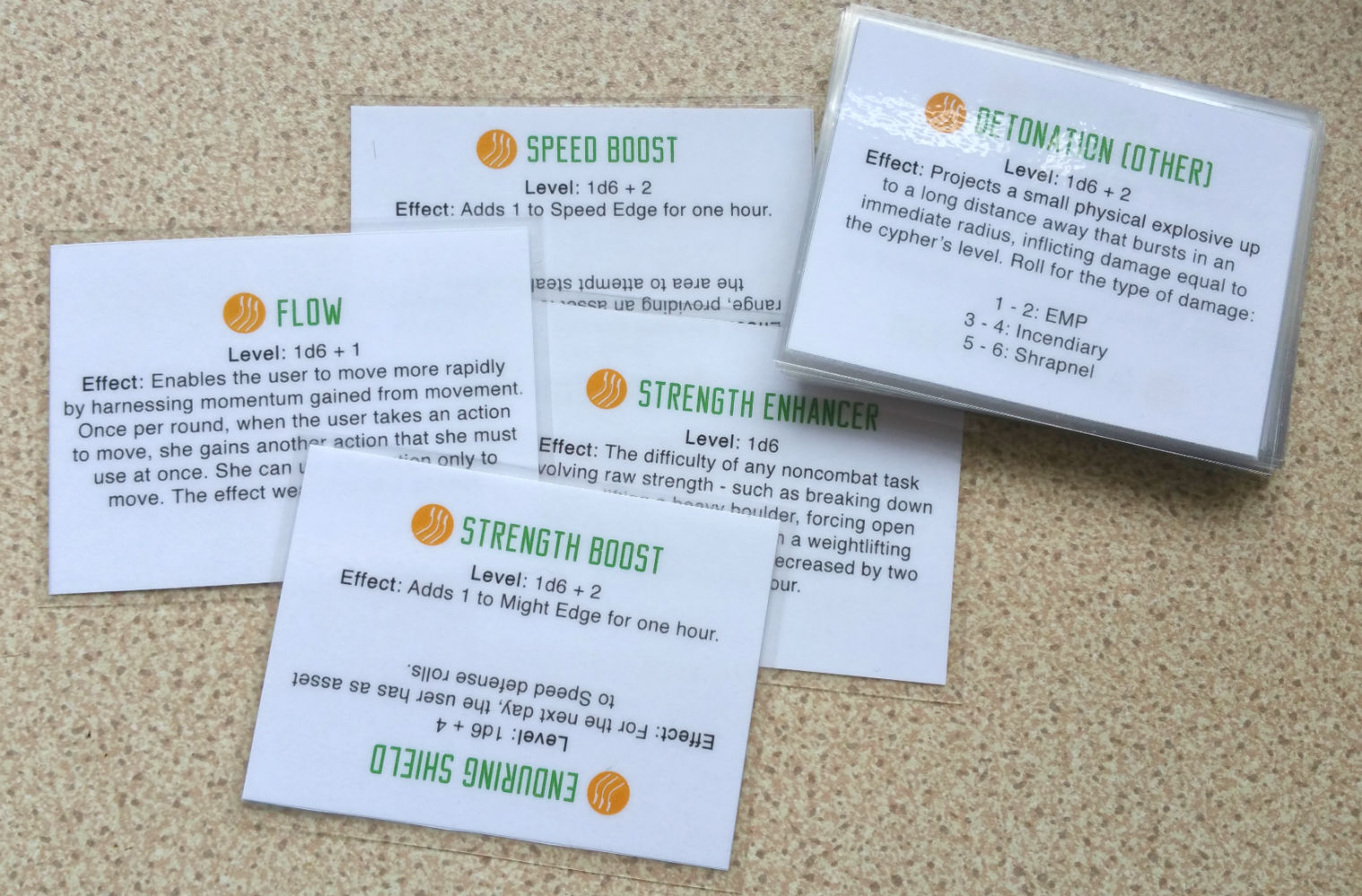 The Cypher System contains some brief guidance on approaching the modern setting without magic or high technology – primarily in respect of Cyphers, the devices that give the system its name. In this instance, it’s down to inspiration, moments of brilliance and spurts of performance beyond normal limits. These

These Subtle Cyphers tend to be insights and discoveries that turn up with each new scene of the game, rather like picking up loot at the end of an encounter. I see these as vital clues discovered, expertise tapped into and the gathering drive to succeed. I prepared a Cypher Deck of mainly Subtle Cyphers, with a few extras thrown in – like explosives – specifically to support the flow of introducing these into the game.

For the Adept, you can opt for a focus on more academic roles or something with a mystic edge, but I actually homed in on Murdock as the example of an adept. He uses madness to deceive, distract, confuse and bewilder those around him. The Hedge Magic of the standard Type represents his tricks and deceptions, moments of legerdemain that border on the inexplicable because Murdock deceives and distracts effortlessly.

Finally, we have the Warrior – the brute, the soldier-of-fortune, the master of weaponry. This could be no other than B.A. Baracus.

There’s slightly more to the Cypher System implementation that made these characters viable. The book contains a lot of guidance for the Gamemaster and advice on ways to customise mechanics to fit the concepts players come up with. I think that’s pretty important in any game, but in a generic system you don’t want to come across like you’re shoe-horning everything into a narrow range of options.

You have guidance on swapping out aspects of one Focus with another, for example, with some discussion on achieving some measure of parity. You can do similar with the character Types and to assist you have various Flavors, like Skills & Knowledge, Magical, Stealth and Combat to use as a means to swap out aspects.

For example, I need BA to be a soldier with a strong mechanical edge, so I pulled in some material from the Technology Flavor. With Murdock, I wanted an emphasis on his quirky character and performance, so chose the Descriptor Entertains. However, for the first Tier, I swapped the abilities with elements from Pilots Spacecraft (tweaked to cover terrestrial flying vehicles.

The process requires discussion between the GM and player; it definitely warrants some thought on a strong concept. With a firm idea of what you want, the process then becomes a matter of seeing how you can fulfil it within the available options. The flexibility of the system makes it interesting to come up with something that rings true. I ended up with some quite robust and capable characters.

The Adventure
The Harker Intrusion is a straight forward mission, as you would expect from a Quick Start. You have a very simple set of potential encounters, scattered across several locations. It begins with a file of material pointing to a conspiracy and a journalist who knows more about it. Find her would be a good first step, and that means a trip to Marrakech.

As it stands, this is the only element I managed to play in the time I had – so, the rest will come in a couple of weeks time. My game needed to be tinged with The A-Team, so certain elements had an overhaul.

For a start, the journalist – Olivia Liu – had been investigation corporate corruption that suggested some connection between an international intelligence organisation and some big corporations in Europe. Bribery of politicians and construction work at some odd locations pointed to something odd going on. More importantly, it would appear that the intelligence organisation had key information relating to the charges leveled at the A-Team and Liu now possessed the same. Find her, retrieve the information. General Stockwell handed over tickets… for the train.

Yeah, BA. There’s a train to Marrakech. Here, have some chilled and tasty milk before we head to the station. 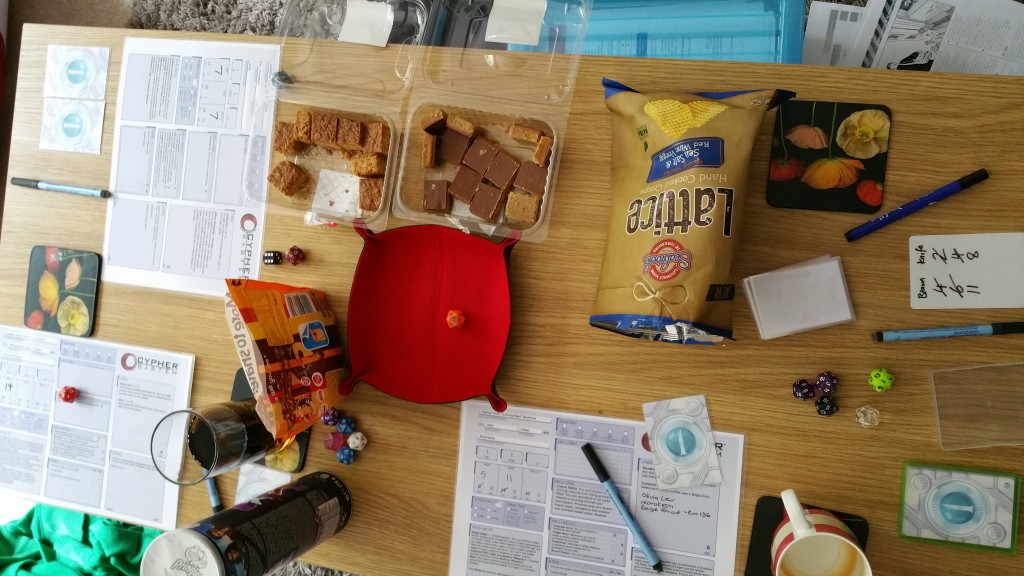 In Marrakech, after BA came round, the team – missing Face who had been assigned to follow-up a lead in the south of France – decided to track Liu down through a local Press Agency office. BA stole a limo and Hannibal disguised himself as a Shiekh looking to meet with Liu about a certain key information in his possession. The disguise and a spot of deception managed (with a Minor Effect roll) to glean a mobile number and the address of Liu’s hotel – as well as the fact she hadn’t been seen in the office for a couple of days.

Anyway, the hotel room revealed someone else seeking Liu or at least the information in her possession. The team stole hotel uniforms for the purpose of providing room service, with Murdock hidden in the curtained lower section of the trolley. They found the room with the door ajar, so BA charged in with the trolley straight at someone ransacking the room but rolled a 1 for the attack. Not only did the ruffian dodge, but the trolley shot across the room, through a curtain, struck the balcony edge and went over. Trolley and content fell into the street, except for Murdock who clung to the balcony edge by his fingertips. Alas, his dangling alerting associates of the burglar standing across the street.

Fortunately, BA’s poor luck turned into something better, with two rolls of 20 in the fight that followed. A couple of punches like a sock full of bricks made all the difference and left two thugs out cold and the third pinned to the wall with blood streaming from his split lip.

A search of the room – and a three-point Intellect spend for Inspiration – revealed a bunch of information. Interrogation informed the team the thugs wanted the same file, but they also had Liu in their sights. Murdock found an address by the telephone for a local merchant in the Mellah and some smelling salts for one thug allowed him to hand over what he knew about his employer. The team grabbed the thugs’ motorscooters and zipped off to see if they could find Olivia.

Without taking the session report any further, the adventure provides plenty of opportunities to try out the essentials of the Gumshoe system. A neat succession of locales and encounters in exotic locations versus a mysterious enemy. The clean and simple presentation makes for a quick read – it’s only about 8-pages in total. The sections highlight clues the characters can discover and how they might find them, including alternate methods of approach.

That very structure and clear lines of enquiry make for easy adaptation to other systems, as I did. Core clues should be obvious while others can be found with the right skills and a few appropriate rolls.

The loose string of potential encounters made the game easy to adapt. The information needed to find Liu, for example, is quite open and I liked the local Press office idea. It led to an extra encounter purely because of the plan. BA failed his roll when he stole the limo, but I liked the plan to get the information. Instead of slowing the adventure with the fail, I allowed BA to steal the car but not without alerting the Police, who caught up with the team outside the Press Agency. Hijinks ensued with the team declaring their innocence before up-ending a newspaper salesmen’s booth on the front of the Police car.

Prep for the game was fun. Marrakech has an ideal environment. The nature of the city makes for interesting experiences with tight streets, tons of pedestrian / unpredictable traffic and interconnected blocks of buildings, ideal for parkour. 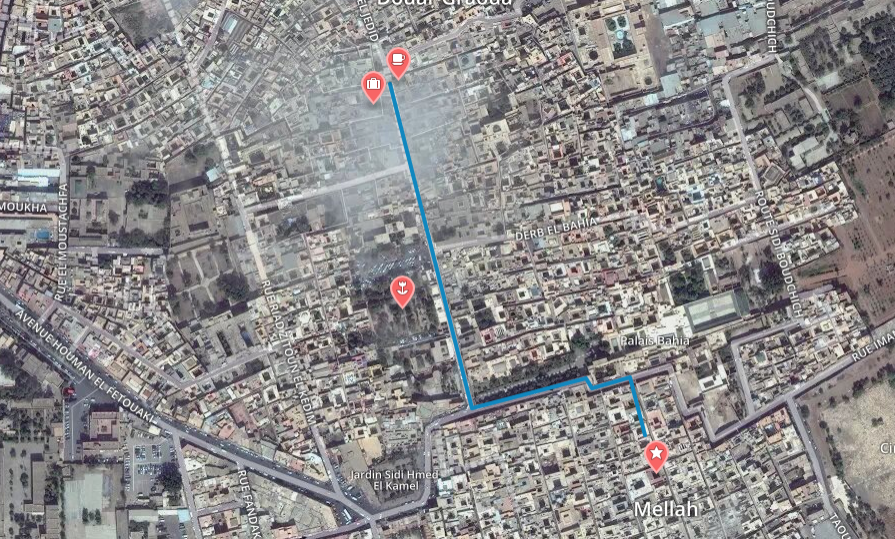 Alas, no Streetview (well, Google can’t get everywhere) – so, I made do with pictures and videos for getting a feel for the place. Not that I’m that great at atmospheric scene setting when the action starts. I guess I got enough of the sense and feel across for the purposes of a quick game. I’d like to have a few more pictures as props if I run the game again. Actually some street noise might be nice as well!

And Finally
I’m looking forward to completing the adventure and continuing to test out the potential of the Cypher System. It worked well for the somewhat pulpy action feel of the game. The character generation system provides some quite competent participants – although all the skills and fair rolls they had didn’t stop their attribute pools from getting dangerously low by the close of the game.