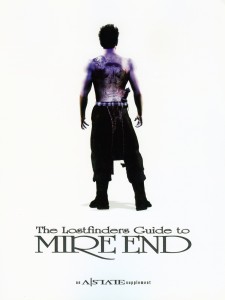 I have been reading A|State, a roleplaying game and setting from the early noughties. Published by Contested Ground Studios, who also published the excellent Cold City / Hot War games – the latter which I see played quite regularly at local conventions.

I first read A|State a long while ago – ten years? – and so I’m coming at it pretty blank slate. I know that I liked it – and I know that I have promised to run a convention adventure in the setting in about a months time!

Essentially, in the distant past, a whole city got cut off from reality – and no one can really account for it. There’s a bit of proto-Lost going on here, as theories fly about what actually happened. What remains is the City – and those who call it home vary from hi-tech mega-corporations through the retro-thugs with more than a hint of the Victorian about them. Slums, sewers, radial canals, gangs, retro-punk tech…

I’m tempted to suggest it’s like Charles Dickens wrote Neuromancer, but I’d just be throwing words into the wind without much justification; it has the right feel. Characters in A|State warrant slightly silly Dickensian names and the crime feels more Victorian than cyber-futuristic.

It appeals to me enough to offer it as a session at an event and if it goes well, all the better – another string to my bow, an arrow for my quiver. I like having games in my back pocket that I can pull out at a moments notice.

It has been a pleasure to read. A bit like dipping in and out of a travel guide. Both the core book and the Lostfinder’s Guide provide overviews of areas, buildings, people and factions. The City feels like a mishmash of places and ages. The weather feels like typical Manchester, as does the presence of so many canals. That makes it of more interest to me.

Plenty about the setting appeals. Snippets of dialogue or character portraits tug at my attention or poke my curiosity. I have read through half the book now with a set of little sticky note bookmarks by my side. When something grabs my attention, I mark it and move on.

I’ll go back and review later. Half of those bookmarks probably relate to creating interesting pre-generated characters; the other, setting material, useful for creating the atmosphere. I need to get a move on. Sometimes I read like I’m taking a leisurely bath. It needs to be a little more like cramming for finals.

As if refreshing my memory on matters A|State were not sufficient a challenge, I also plan to run it with the Cypher System. Why create just one rod for my back when I can get a cat-o-nine-tails from Amazon at half the price?

Well, it worked for running The A-Team, so I figured why not?