The Effects of RPGs on Me

The Effects of RPGs on Me 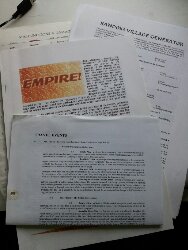 RPGaDay Day #7 asks: What aspect of RPGs has had the biggest effect on you?

There existence has impacted me significantly, as without them and my interest in them, I would never have got into writing in the way I have.

I spent about 10 years running play-by-mail games in the late 80s and early 90s. I appreciate that it didn’t make me a better writer in a grammatical sense, but it did get me into the business of just writing for the fun.

I like writing. I can happily sit down and write almost anything. If I know that someone else will see it, well – that’s when the doubts might to creep in; but, that’s just me. I have self-criticality seeping out of my pores.

Without that early exposure to roleplaying, I likely wouldn’t have much of a reader either. Tackling the complexity of a roleplaying rule set has likely honed my analytical approach. I pick text apart. I don’t mean in terms of spelling and grammar, but in terms of shapes, associations, processes and the presentation of information.

Oh… and I really struggled on the question for Day #6: Most amazing thing a game group did for their community? I genuinely have no recollection of any group involvement with the community, beyond the gaming community itself. Not that individual members haven’t got involved in their own way, but I don’t think the charitable actions had anything to do with the group!