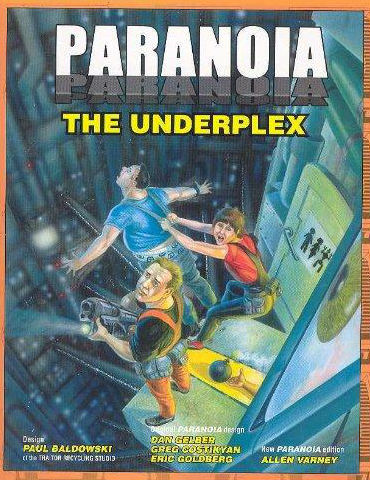 RPGaDay Day #3 asks: Character moment you are proudest of?

I’m going to go weird and wild here because my proudest character moment is a setting.

In 2004 (or thereabouts), I got the chance to help with the text of PARANOIA XP. I got the job of working through the skills and service groups, contributing original text and some conversions across about 25 pages, which was nice. It also got me a place amidst the Traitor Recycling Studio.

In the Mandatory Fun Pack, which accompanied the GM Screen, I added a single line in one of the tables that referenced The Underplex. Offhand and nothing more, it later became my first solo writing project – a 48-page setting supplement of what lies beneath the underground Alpha Complex.

That’s the character I’m proudest of. I had the chance to take this thing that I created and flesh it out – drawing on some of the material published in the past about ‘dungeons’ beneath the realm of Friend Computer and taking it further.

It wasn’t perfect, but it was mine.