Pray You Don’t Brick It

Pray You Don’t Brick It

Yesterday, I wiped the basic operating system (OS) off my 3+ year old tablet and replaced it. That took a leap of faith, I can tell you.

I have tinkered with a cheap tablet before (which came in fairly non-functional to a charity shop) and managed to utterly brick it within an hour. I suspect it always would have ended up that way, but it gave me pause for thought in this instance.

Having had this tablet so long, I sort of suppose intrinsic value rated far higher than actual worth. You can’t buy this model anymore, so I doubt anyone else would have wanted it for anything other than a back-up, a tinkering project or whatever. You don’t appreciate how quickly technology can go out of date sometimes. This tablet has been replaced three times over at least.

Whatever the value of the device in reality, replacing it would have cost me money if I had turned it into a lifeless brick.

I use it a lot for reading, so I would have missed it. I can use my phone for reading, but… well, it’s a bit tiny for comfort. The tablet screen makes reading practical. While I can read a PDF on a computer screen or laptop, that fails on portability grounds – as I can’t, for example, drag either outside when I’m exercising on the stationary bicycle.

Anyway, I did a lot of reading. I recommend you do the same if you’re considering the same.

While the reading might seem like the boring part, I suggest better you do it before anything else, rather than halfway through. You don’t want to come back later when things go Pete Tong to note that you missed something painfully obvious that happened to appear in the notes at the end of an article you didn’t read all the way through.

Search engine roaming definitely pans out value wise. Feel the urge to follow a link? Do it. Don’t hold back. Read. Make notes. Bookmark the stuff that seems important – or, like me, keep a bunch of tabs open in your browser with the most valuable and informative stuff front and centre.

Don’t, under any circumstances, ignore warning messages, errors, or other details just because. I tried to use ADB – the Android Debug Bridge – at one point and experienced problems getting it to work. Again, and again. Frustration set in quickly and I almost turned back. Then I did a bit of reading, rooting around in Google through pages of results beyond the first – and realised that I wasn’t using the application right. I needed to enter some extra command line information to get what I wanted. I almost turned back and restored the tablet for want of some patience and reading.

CyanogenMod.org had a lot of information, and if you have a new-ish device, it even has a piece of software intended to guide you through the process of replacing your OS. I checked and found my tablet incompatible, so had to do it the hard way. More of that reading.

I had to identify the device identity of my tablet and use the right version of the OS package. Then you get a piece of software called Odin and start pushing little packages of information over on to the device. I had all the pictures on my device backed-up already before I did any of this and knew all the other content didn’t matter anyway. I have copies of all my reading material stored elsewhere or in the Cloud, so the copies on the tablet could disappear and I would be OK. On the other hand, if they did disappear it would mean I had done something wrong, as the process cleans the internal slate of the device, not the storage – like the SD Card or whatever.

Then I had to start fiddling around with recovery modes. You push the power and volume buttons to restart to a system screen and choose to backup, restore, install or whatever. I won’t go into the detail, but I think all told I took a good three or four hours to finish the process. It didn’t run completely smoothly all the way.

At one point, I managed to get the CyanogenMod start-up screen… and nothing else. A looping graphic spinning into infinity. Very pretty, but not right. More reading identified a solution, which meant get another file into the System folder of the device. I had to load an Android developer kit on to my PC – and that’s where the ADB thing came in. After finally working out how to use it, mounting the System folder to make it accessible, I transferred the file, reflashed the Mod (after some more reading and a block of white error), and restarted… successfully.

I had it. I got all the way through to the device ‘desktop’. Then I had to figure out what to do from there, as you don’t have a convenient shop to get applications from. Fortuitously, someone has made a package of Google applications that you just need to transfer on to the device and flash in recovery mode. My advice, find that ZIP file and transfer it across when you do the CyanogenMod one. I didn’t – and found myself unable to easily get the file transferred, because my PC didn’t recognise the device anymore as accessible storage space. I had to DropBox the 90Mb+ file in the end.

Now, with Google Play, I could easily move across some of my essential applications. I intend to keep the device as clean and clear as possible, so I don’t end up slowing the tablet down again. I like the sleek simplicity and hope that means fewer crashes of key applications. Of course, if it does start happening all over again, I know how to clear it out and restart this time! 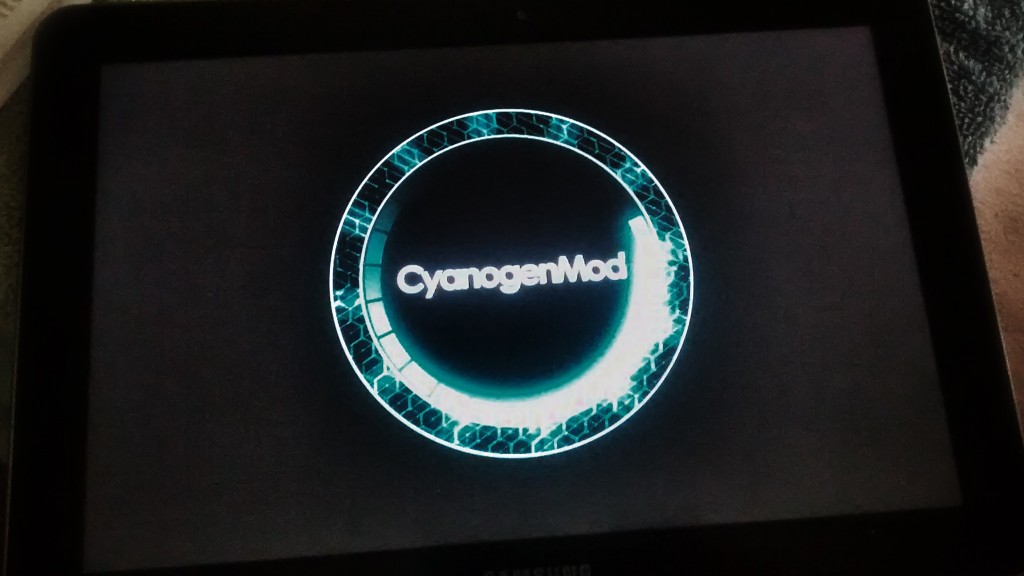