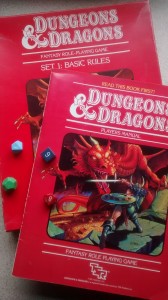 Well, that would be red box Basic Dungeons & Dragons.

I’m guessing it would be in 1984, when I was 12, or thereabouts, and in my second year at Beanfield Comprehensive School* – in the small industrial newtown of Corby.

I had managed to show enough interest in music to find myself a member of the School Brass Band – a privilege of which was the option to use the Music Rooms during breaks. That meant no more hanging around the playground in poor weather, dodging the attention of bullies.

At some point – and I absolutely cannot remember the circumstances or nature of the invitation – a chap called Graham suggested D&D. One lunch time, the Red Box appeared with copies of character sheets, and I rolled up a Fighter, Ironheart.

I recall sitting in one of the practice rooms around the back of the main music room. We spent our lunch times working our way through the adventure, in the DM’s book, toward the illusive arch-villain Bargle. I’m not even certain we finished the adventure, but it definitely made Dungeons & Dragons my First RPG Played.

(Posted as part of Autocratik-inspired #RPGaDAY thing – http://www.autocratik.com/ – you can read about here: RPGaDAY)

* Beanfield Comprehensive School has since been demolished, leaving nothing more than cement foundations in an open field. Oddly, the Junior and Infant Schools remain. Possibilities that satanic or supernatural forces consumed the school exist – but, my understanding references something more real world and toxic causing the demolition.