H is for History

H is for History 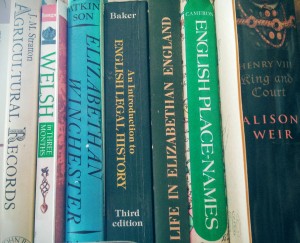 History has become the backbone of my life. Well, maybe one of the big bones in my arm. It’s significant.

Mind, I’m not necessarily talking about all history. Some of the recent stuff I find of interest, but I would spend a lot of time studying it. In truth, there’s so much history that if you spent more than a moment considering any given any element in detail you’d simply run out of time.

My wife often asks me whether I’d be interested in a book she’s found in a second hand or charity store. She’ll ring me up while I’m at work and ask would I be interested in “X”. Sometimes she’ll take a stab at a period of history and query whether she’s got the right bit.

See, I like my history late Tudor. I’m talking 1550 – 1603, but mainly Elizabethan. I occasionally roam outside that region, but that’s where I focus. For example, I have an interest in Doctor John Dee, who served as Elizabeth’s advisor and court magician, and his childhood extends outside that period. I like to know where people came from and what influenced their thinking.

Anyway, 1550 – 1603. If I cared to drill down further, I tend to look at the socio-economic stuff, the business of everyday life and living. Again, I’m not beholden to that view. I have books on espionage, sea battle, exploration, magic, European relations, religion, Shakespeare, armoury… but I keep coming back to the common people. What living in a farm or a specific small town boiled down to during this period.

I’m not certain why this sort of thing has become my core interest. I have no particular account for when it happened or why. I take an interest in the high-flying politics and the bloody warfare over land, religion and family – but I’ve a greater interest in urban development, begging, how weather affected farming and the way guilds changed work.

I like the nose to the ground detail of people living their lives, likely quite oblivious to the big changes sweeping across in the backdrop. Given the state of communication and the insular life of the ordinary people, you have to wonder whether many even knew when they were at war, when key nobles grabbed control of distant regions or even when the monarch died.

It fascinates me. I would definitely recommend that you pick a spot and look long and hard at it. Find a person or a place and dig deep.