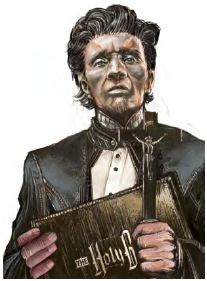 What I love most about writing is the research. I love the process. I enjoy digging. This isn’t about a Wikipedia article or two. This is articles in journals, studies, biographies, videos and more.

For the Director’s Handbook of the Dracula Dossier, I had two assignments: the Enigmatic Monsignor and Italy.

Aside from a couple of key associations with existing assets and elements, I had the freedom to go where I wanted.

The Enigmatic Monsignor needed to be key to the Vatican vampire hunting squad and ideally have nothing to do with the Inquisition (the fallback option for handling heretics and monsters).

My first draft made a bit of a false start and swerved too far away from Ken Hite’s vision of the character. I didn’t quite get the focus right, so needed to dig deeper into the Vatican’s handling of exorcism in general.

I found reading about Father Gabriele Amorth and the establishment of exorcism as an ordered and procedural process, rather than an ad hoc power of the clergy, really interesting.

Amorth proposes in his books that before his time many practiced exorcism without training or any real understanding. Some treated it like a gun to be used only in emergencies, locked away in a cabinet gathering dust. The lack of real understanding put people at serious risk when subjected to possession or the malign influence of the Antichrist.

Before Amorth, exorcism felt like something weighed down by trappings of superstition like it had no place in the modern world.

To be clear, I’m – at best – agnostic. I certainly don’t have the sort of belief that Amorth possesses. Nor, thankfully, did I need to get inside his head to get what I needed for the Enigmatic Monsignor.

The Enigmatic Monsignor sees physical corruption as a key aspect that requires due consideration and cleansing in pursuit of purity. Stepping beyond Amorth, the Monsignor believes in the need for science and faith in balance, as the only certain route to understanding possession and the possessed.

As the smaller assignment of the two, I didn’t expend as much time and research on the 600-word character – but, nevertheless, found the process equally enjoyable. I find the whole Director’s Handbook filled with diverse – and sometimes conflicting – ideas for GM and agents to deal with. Even if you don’t play Night’s Black Agents, if you have an interest in Dracula and Stoker’s tale, espionage laced with darkness, and conspiratorial corruption, you should pick up the Dracula Dossier. Without delay!