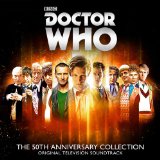 I have been listening to the CD that my wife kindly purchased me for Valentine’s Day. At the moment, I’m listening to the first of the four CDs included, specifically the music from the First Doctor’s tenure.

While the music doesn’t necessarily have the same rich orchestration of new Doctor Who, it does have a tremendous amount of character. The second track, Three Guitars Mood 2 could easily have been Susan’s Theme, like the character focussed musical motifs so common in new Who.

If you’ve been searching for background music when playing sessions of the Doctor Who: Adventures in Time and Space tabletop game, look no further. The first 21 tracks – of the 53 on the first disc – not only include the series theme from 1963, but also the dematerialisation and materialisation of the TARDIS.

As well as such iconic sounds, the first few tracks also offer alien soundscapes suitable for sticking on a loop. The Forest Atmosphere, Forest with Creature and City Music from “The Daleks” should stand you in good stead for most generic alien worlds – giving you the essential atmosphere to get players in the right frame of mind. There’s nothing stopping you using these in any sci-fi game for that alien world feel.

If you’re open to camp robot sound effects, look no further than the Chumbley (Constant Run) from “Galaxy Four”. Capsule Oscillation provides some odd sound effects for a laboratory or control room, while Explosion, TARDIS Stops (from “The Edge of Destruction”) can carry those heart seizing moments when some nefarious foe brings the danger to the character’s time machine itself.

Care for something more dramatic, you want to go for the Space Adventure music from “The Tenth Planet”, Hartnell’s final tale. The kettle drum serves up the thumping beat appropriate to a dramatic chase or the final showdown with the enemy menace.

Without going further than the First Doctor, you have all the background music you need – and if you’re inclined to run the official adventure from Cubicle 7, Medicine Men, you’ll have a definite use for The Ballad of the Last Chance Saloon, which has more than one song to serve up as the party comes through the swing doors to the tinkle of the piano in the corner.

I look forward to more of this first selection, covering the first three Doctors – and I’ll keep you informed on my thoughts for their value in enhancing your gaming experience.