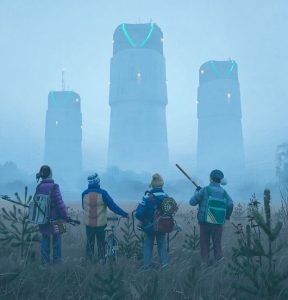 Tales from the Loops provides an odd playing experience in our group.

We had our second session this week and it felt weird – not in-game weird, but play experience weird.

We have made slow progress on the plot line, but at the same time the role playing experience has been fuller and richer than anything we have done in a long while.

Players continue to channel facets of their childhood recollections. Most of it comes out in the sort of hijinks and insults that proliferated the playgrounds. Unintentionally, it can get quite snippy and sharp – and I can see X-Card territory all the time if you were to take this mode of play into the open.

Character generation – or the building of character background – consumed more than half of the first session. More plot emerged this week, but at the same time a fair amount of the session continued to revolve around the relationships and intermingling of the characters.

The archetypes create a mixed setup however you approach it. You will always end up with the potential for internal conflict and one-upmanship from the get go, though more conflict stems from the realities of home, antagonism toward parents, and the imposition of authority.

Sometimes we just giggled, or argued, or hurled abuse in a childish tit-for-tat battle. All very base, low brow. Never too offensive or off key. Well… mostly.

The highlight had to be one player pretending so hard to look like they’d be sick that they almost made themselves sick. Thankfully, the vomit remained in-game and the guilty party immediately went off in search of the bucket of sawdust.

It felt, at times, that introducing the plot felt forced. One player commented that I shoehorned an encounter into the story – and that might be true. However, left to their own devices I don’t think we would ever have stumbled across any of the plot at all.

Kids and adults are calling in sick. A lot of them. The ill start with cold like symptoms, but they get distant and sleep more until they do nothing but sleep and cough, deep gurgling coughs. Someone reckons that Alva, in one of the other classes, drowned in her sleep. No one can be sure because none of the adults will talk straight about the situation. The deputy head won’t say what’s wrong with the head; the PE teacher (bitch!) stood in for Art, but she seemed sick herself.

And then one of the local police officers came to the kids (kids, of all people — the police coming to kids!?) to explain her theory that the Loop has something to do with the illness; she offered evidence in the form of blurry photographs of human-shaped things with glowing eyes, taken on the edge of the next island. Too blurred and distorted to make much sense of, and she seems strung out on something other than work and coffee.