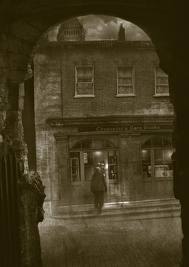 I have had a busy gaming long weekend, running Numenera and TimeWatch at Concrete Cow and Bookhounds of London last night, for my local gaming group. Despite 8 hours gaming I have incited very little dice rolling and managed to get by on minimal prep, which works out fine for me.

I have found with many games that despite the mechanical need for dice, their appearance always seems to be far less frequent than I’d imagined. The story seems to take over and when the dice appear it always seems I’m suggesting it out of guilt. I feel like they’ve made the attempt to turn up for the game so they should get rolled.

In Gumshoe last night, we had a couple of dice rolls over a 2.5 hour game – and one of those rolls happened in the first few minutes, when a potential patron spontaneously and messily expired. It doesn’t feel wrong in Gumshoe for this to happen, because the game’s about clue, finding them, and pretty much managing it the whole time without needing to mess around with dice. On the other hand, players quite like rolling dice.

As well as minimising dice rolling (though not intentionally), I also tried to minimise the rules last night by playing using Graham Walmsley‘s Dark Trail [PDF link] – a stripped down Gumshoe ruleset, written under the Gumshoe Open Gaming License. You can print the whole thing out on a single page and come up with a menu-style rulesheet.

Anyway… Dark Trail boils character generation down to choosing investigative skills, choosing general skills and assigning some standard totals for Health and Stability. Very straightforward. However, I found out last night that open character generation can create more of a barrier to creativity than a list of specifics. I had intended not to even bring a proper rulebook, but in the end I felt I had to hand them over to support the players in choosing skills.

I’m not sure how best to handle this in future.

If I wanted to create an estate agent or a space ranger, I think I know what skills I’d go for – especially where you have a game with a finite pool of creation points and a standard range for skills. If you have 20 points to draw on and investigative skills should run from 1 – 4, with anything above 1 suggesting an area of particular expertise, then I’d aim for about 8 or 9 skills – maybe a single 4, a single 3, two or three 2, half a dozen 1 and then ask the GM nicely to retain the rest as a floating pool.

Perhaps, like Fate Core, I could suggest a skill pyramid as the basis for assigning skills – and then suggest some kind of very basic brainstorming technique to rough out the skills important to the profession or class. Reading Gamestorming at the moment, I might have to consider picking out one or two idea-generating approaches as ways to facilitate character generation – something that I’d never really considered before writing this. I suppose many storytelling games do that already, but I hadn’t joined the dots between in-game action and brainstorming approaches.

Cliffhanger Ending
The game itself went well. I won’t go into details or analysis on the specific adventure until we have finished, but an initial incident led to a gathering of core clues, then the party split to follow them up. A chance encounter by one group led to more clues, then everyone convened back at the bookshop. After a brief catch-up and pooling of thoughts, a knock on the door introduced the Police and the implication that the player characters might have some involvement with a crime.

The character generation meant that we didn’t get the full 3-hour session. I suspect we might have managed 2-hours. On the basis of current progress, I expect that next week – if we get 2.5 hours – should conclude the adventure.

Despite the character generation running a little slower than I’d wanted, it did provide the opportunity for some in and out of game chat. I never quite know how best to handle chatter. I’d rather have a mellow group of players, comfortable and entertained, than drive a forced march – but, at other times, I’m also aware that we have a limited gaming slot each week. I think, in this instance, I’m inclined to leave it to the players to self-manage the situation.

I liked the fact that I managed to squeeze in a cliffhanger ending, simply by pushing on for a couple of extra minutes. As we play in a pub, when we hear the first bell for last orders, that normally signals the end of the session, but in this instance I could smell the prospect of an ideal stopping point and pushed on.

I couldn’t let it just hang on something without substance like convening back at the shop – which didn’t really present an inspiring conclusion for the week. The game started with idle conversation, before shop opening time, followed by a knock on the door – so, I thought it perfect to end the same way, but with a surprising alternative customer occupying the doorstep. The presence of the Police led to a shocked cry from one player and a moment of incomprehension, so I think I did the right thing!

Having recently watched Spearhead from Space – the first adventure of the Third Doctor, which I picked up following reading the Cubicle 7 sourcebook – I think I may have learned a lesson about cliffhangers. While I loved the story and thought Pertwee magnificent given his newness to the role, I found the end of each episode exasperating. Sometimes I positively cringed at the desperate effort to extract tension from a situation that contained none at all – often achieved by dragging out some innocuous encounter for far too long, then punctuating it with a yelp or cry before the theme music cut in. I couldn’t let that happen here.

Leaving the players hanging with a mystery in full swing, a few clues to chew over and the Police on the doorstep makes for a tension that should hopefully bring them all back next week keen for more. I’m looking forward to the conclusion.