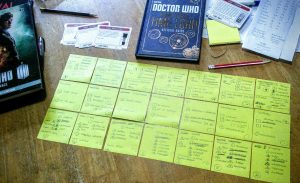 I’m running one or more convention games of Doctor Who (from Cubicle 7) over the next few months, starting with this coming weekend.

This past weekend, I finished creating a set of “pre-generated” character cards for the game.

Essentially, they’re not complete characters by any measure – just enough to get through a session. While I could easily have done six or seven fixed character sheets, I have been pleased with card-based characters when running The Dee Sanction and Night’s Black Laundry. My thinking, why not!

I plan to lay the cards down on the table and players get to choose one (or more) from each row as the game progresses. In practice, when someone pushes a challenge, then would be a good time to choose a card.

Alternatively, they could take one from each row at the start of the session. Or I could hand them out at random. That’s the approach with the other games I’ve used character cards. Indeed, my last game of The Dee Sanction generated some fantastic characters right off the bat based on the cards alone.

I think these cards might warrant some tweaking to achieve something like that. I’d quite like to add a random naming suggestion and maybe a motivation or two.

In use, characters will possess any Skills not listed, but they’d have a value of 1. Or zero. I don’t want to go down that route. I’d rather people stick with what they’re good at. Otherwise, players can make rolls based on Attribute alone if no one has the right Skill at the given location or a specific scene.

I tweaked the character generation process of my Call of Cthulhu game on the same basis around skills. I dislike the standard method that creates characters with tiny percentile chances of success on skills.

All characters start with 12 Story Points. Because I’ve created the cards without the full spread of abilities, I don’t want to penalise them further! While I have given everyone a gadget worth a Story Point, it still doesn’t quite compensate.

The three cards align in a column. I noticed that you could actually boil the standard character sheet down into a half an A4 column – so, why not do it with cards. 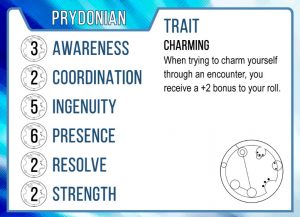 The top row of cards has each of the six classes from the Time Lord Academy, plus a Gallifreyan who opted to ‘go wild’. The Shobogan made their appearance in Classic episode The Deadly Assassin. I wanted a non-Time Lord as an option, but with the potential to be involved and of value. Herein, the Shobogan fills the base roll of a more physical Gallifreyan.

The middle row has aspects of personality, which serve up good and bad Traits.

The bottom row fits a sort of career path, offering an extra Attribute point and key Skills. Also, extra Traits and a Gadget.

My adventure concerns students escaping Gallifrey at the start of the Time War, which (from a plot perspective) excuses the shortfall in points here and there. They are, however, the best and brightest the Academy has to offer.