Playing for the Fun

Playing for the Fun 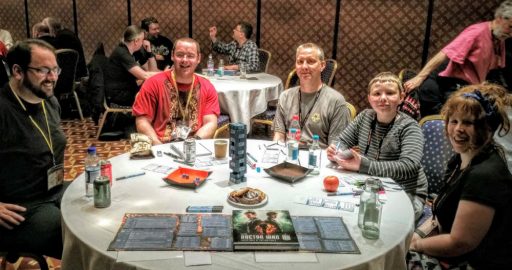 On Free RPG Day, I bet there were people who visited there Friendly Local Game Store and walked away with tabletop roleplaying games in hand but haven’t run a session since. They’ve watched all the episodes of Critical Role and loved the idea of Dungeons & Dragons, or watched all the movies and wanted to step into the Star Wars universe for real.

If they’re anything like my wife, they picked up that fat book with beautiful cover art and gorgeous layout, then discovered the density of detail within. What’s worse, some will have chosen Star Wars, Marvel Superheroes, Doctor Who – some well know franchise, some cinematic property. They will have been carried along by their own enthusiasm for the genre only to realise, in their darkest hour of reading that big fat book, that maybe they don’t know enough!

What if the players mock me? What if they don’t enjoy it? What happens if I kill off Admiral Ackbar or send Captain America into battle with the Fantastic Four (which obviously hasn’t happened in the Cinematic Universe… but it’d be cool, right?)

I think this is the sort of thing that frightens many people – the belief that you can never know enough to avoid the trauma of having someone note the ambiguity in your setting, bringing the session to its knees with an act of Wikipedia. For all the entertainment value in just playing the game, you find yourself crippled by self doubt in the setting itself – despite enthusiasm in the real world. The films or the comics fill you with joy and, heck, when they come up in a quiz you’re the one with the answer – but… what if someone else around the table knows more?!

However, games can, and should, be about having adventures in a -esque environment. Roman-esque. Marvel-esque. Star Trek-esque.

Yes, yes – they won’t stand up to scrutiny. And yes, you might find that you killed off someone important who actually matters down the line in the films – or who turns up in a published supplement. So what?

Having games in the style of with a backdrop that feels just enough “right” to make it different, but doesn’t expect to present a whole and perfect reenactment… that’s the right way to do it – because we’re not near Worcester trying to enact the final battle of the English Civil War in funny hats and armour.

I think it’s entirely possible that some would-be GMs who have picked up any RPG book might have put the book aside when they got home and allowed it to gather dust because they feel that the expectation around the table has to be doing it right – i.e. with factual accuracy or absolute respect to canon – rather than playing for the entertainment of a group of friends. Where’s the fun in that?

You’re playing a game, first and foremost, not writing a dissertation or appearing on Mastermind. Faced with the complexities of fictional and non-fictional worlds, periods and settings, even the creators would struggle to get all the facts in order. You imagine that G R R Martin hasn’t had a moment at a convention or event where a fan has asked a question he didn’t know the answer to off of the top of his head? And who are they to question the creator of the entertaining?

You’re the creator of your world, the source of this session’s intrigues and fun. You should have fun to and that might just mean breaking a few conventions and fudging a few facts – because the minutiae can go get. The fun lies in not sweating the small stuff and everyone enjoying themselves – canon go fly.