In The Ninth World

In The Ninth World 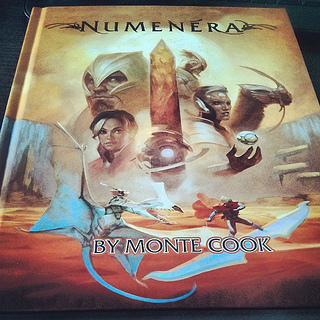 I have put off reading Numenera for too long. And, now I regret not getting around to it sooner.

Monte Cook certainly has come up with a simple sell in the Cypher system. The whole thing boils down to: player decides what they want to do, GM selects a difficulty, player rolls dice and cites benefits, and the GM declares the outcome.

Similar to The One Ring‘s fairly standard middle of the range difficulty of 14, a lot of basic rolls in Numenera fall into more or less the same difficulty I think. Probably a 3 or 4. Multiply the difficulty number by 3 to get the target to roll against. Then roll a d20.

The other 400 pages provide fluff.

You get a pile of information on setting, a bestiary of beasties, a section on technology (the titular numenera), four adventures, and a bunch of GM advice. The character creation section is very modular – creating a character very quickly indeed and not bothering too much with lists of skills, weapons or fiddly stuff. Yes, you have lists of abilities and proficiencies, but they’re a menu style set of options that you can mix and match – and I’ve seen some damned decent fan-created additions.

I can see myself getting to grips with this system and running a few adventures. I haven’t read the setting section yet, so I’m not sure where I’d dump the characters if I started something. I opted to bounce around, reading the crunch before wading through the tech and bestiary, then leaving the setting until last. You get plenty of referencing the Ninth World throughout, and the GM section goes to some length in discussion about how to run the game with sufficient weirdness. Thought I could get a grasp without knowing which settlements sit where.

I get the feeling that once I started running the game I’d set the rulebook aside so as not to reference it. I imagine it would be a distraction. In reading the rules, I got a sense that intuitive gaming was the way to go. Maybe a reference sheet or two, but nothing else. I’m a little confused by a review I read on RPGNow –

Not as rule driven as DnD or Pathfinder but definitely in the same category.

I’m not sure he and I read the same rulebook. Numenera might be a thick book like Pathfinder, but it isn’t anywhere near as complex crunch wise. I’ve covered the crunch pretty much, above. You can tweak the difficulty down with skills, assets and good conditions, or suffer a penalty because of poor conditions or adversary advantage, but that’s about it. The other 400 pages probably could be fluff… they aren’t, but you get the core system in a scant number of pages. What Monte does in the rest of the space gets you drawn into the Ninth World and what it has to offer.

Having gone through the rules, I’ll now skim through The Ninth World Bestiary and maybe even read through The Devil’s Spine again. I’d didn’t much like it the first time, but I hadn’t read the rules at that point. I’m not convinced knowing the system will help, but perhaps I’ll have a clearer idea about what I might tweak to set it right.