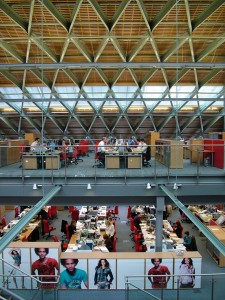 I think the moral of this story might be that if you know a little about something, you may become the everything for those who don’t. The phrase of relevance might be “in the kingdom of the blind the one-eyed man is king.”

I was struggling for something to write, but then, this morning, the oddest thing occurred to me. Despite my best efforts, I always seem to be the fallback for IT support in my house. Why this would be the case is something that troubles me endlessly, as I’m not by nature the sort of person who knows what IT is all about.

I’m not an IT person at heart.

My day job is as a Business Analyst for an IT service provider. Essentially, I talk to people who “do” and translate their needs and expectations into documents for IT to deliver. I sort of translate business speak into IT speak though I’m not expected to be 100% fluent in either.

If I had the option, I would spend my time emphasizing the Business in my title as a Business Analyst. Instead, I spend an awful amount of time trying to wrangle with the information technology rather than the business processes I’d be more settled and comfortable with.

I don’t really know where this transition to IT happened. Perhaps it happened 10 years ago when I started working for Shop Direct in Liverpool. At that time, I had the grand title of a Business Relationship Manager, though it was a Business Analyst at heart. I sat in the IT Department of the company and had occasion to spend time with the business. I would dash across to chat with them, write it down and then finesse the output into requirements for the IT folk.

In truth, the company created something of a culture of us and them by sitting the IT Department in at least two buildings physically separate from the business core. They had an office in the centre of Liverpool, in the John Moore Building (I think it was called), and another across the way from the converted aircraft hanger in Speke.

The one in the centre of Liverpool contained a lot of staff from Shop Direct before the company merged with Littlewoods to become the catalogue powerhouse of today. They worked on a lengthy transition project that saw the merging of the two company’s systems, and I think the core team sat in this central, but distant, office.

At Speke, the IT building felt like an afterthought built out of a depot. On one side of the building they had a stripped down warehouse facility, all huge rooms looking like the inside of a whale. Girders rising overhead like the exposed ribs of the beast. I think they’ve since done some work to make the environment more human and useful. Then, it had that feel of an unused space with long and starkly lit corridors.

The IT folk sat in a section on the far side of the building. It almost felt like some kind of quarantine arrangement. You had to walk along a corridor that felt like the spine of the whale, passing double doors along the distance that opened out into the warehouse-style rooms. Occasionally, the buyers and merchandisers from the other building would come across and you’d see them taking pictures or sorting through great racks of clothes. Perhaps you would glimpse a great A1 sheet of foamboard littered with pictures and outfit sketches, a gathering of creative types clustered about casting opinions.

Anyway, I spent a lot of time mixing with IT – and when I moved to my next role, it didn’t really change. More of the same. I spend more time amongst IT worrying about translating business needs to IT possibilities, rather than improving or enhancing business processes.

The upshot seems to be that I get treated like the IT support team at home.

When someone wants to know something about bog standard IT, they turn to me. Want an application installed or an email account setup, I’m the one to turn to. It actually takes me by surprise when my tech-savvy sons who probably know more than me about phone apps, for example, ask me for help when it comes down to an Imap email account setup. What gives with that?

That was the thing that caught me by surprise before writing this. My son can handle streaming anime from across the darkened corners of the Internet, but he can’t handle setting up an email or resetting the password. It appears to confound him – and I had to resort to sending him a ‘How To’ guide from online.

I suppose I should make the most of this feeling because as time goes by I imagine that I’ll know less and less than him. My youngest is taking a degree in Applied Physics, so he already spouts nonsense that makes no sense to me; not that I have much need to chat about theoretical physics on a day-to-day basis anyway.

The end result of this whole matter comes down to my offering added value because my career hasn’t quite gone to plan and I’ve learned a little too much about office-based IT. I hope to remain a go-to jack-of-all-trades as long as possible. While it isn’t exactly what I would have chosen, I guess it’s quite nice that I’m wanted and useful!