G is for Games

G is for Games 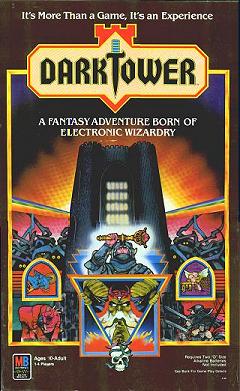 It would be remiss of me not to mention Games for today’s letter.

Games have become my life.

I have no recollection of when I played my first game, but I still have the Snakes and Ladders board my sister and I played on as kids at my Gran’s house. The board has an orange background overlaid with ladders and bizarrely psychedelic looking snakes.

I also remember we played such stalwart family favourites as Game of Life and Monopoly, but the standout has to be the Dark Tower board game. A roughly circular game board showing four kingdoms across the quadrants. At the centre, a black plastic fortress with a window displaying events and a keypad beneath for registering moves. Visiting locations, like the bazaar, produced a theme that I can remember even now. The bazaar had a sort of snake-charmers tune, exotic in an electronic sort of way.

From the mid-80s onward, my gaming interested shifted to roleplaying games. I discovered Dungeons & Dragons at school, playing games during lunch in the practice rooms of the Music department with fellow members of the brass band. After that, I picked up my own games to run for friends – like the Middle Earth Role Playing (MERP) system, Doctor Who, and Star Trek. I played many long hours of Warhammer Fantasy Roleplay and 2nd edition Advanced Dungeons & Dragons.

My love for Lovecraft and the Cthulhu Mythos emerged at this time, from the deep box of the Games Workshop reprint of the second edition Call of Cthulhu game. Matt Houston, a hard-boiled private detective from Boston, enjoyed many adventures and a progressive loss of sanity and body parts.

I ran play-by-mail roleplaying games through the late 80s and early 90s, a labour of love that covered fantasy, cyberpunk and interstellar warfare. I made a lot of great friends during that period and spent way too much time hand-writing responses for a pittance. By the early 90s, hand-written stuff dwindled, replaced by dot matrix printed output from an Amstrad computer.

Roleplaying took a back seat in the late 90s but returned in the Noughties when I got married and acquired two sons. In a way, my interest in games and science-fiction generated the circumstances that led to my meeting with my future wife; so, another thing to thank gaming for!

The fad of the Pokemon trading cards turned to Magic: The Gathering; Magic turned to the plastic and flocked bases of a grim and distant future in Warhammer 40K. As the boys pursued an interest in ‘cardboard crack’, I rediscovered my love of roleplaying.

I got the chance to write for PARANOIA XP for the relaunch by Mongoose Publishing in 2004 and the historical roleplaying game Maelstrom, reprinted around the same time. I had the chance to return to games I had loved from 20 years earlier – and dabble in the business of writing.

All through that time I have gathered games, as well as offloading one or two. More of the former than the latter. As I mentioned in my post about Books, I can escape in reading – and my games form part of that escape. I can pick up a game manual that would frighten the uninitiated away, yet for me, it provides a soothing departure from the real world.

Other people enjoy a good holiday abroad. I’m happier voyaging to worlds in the crunch of a new game system.