Behold the misbegotten and combined Free RPG Day acquisitions of the Baldowski Scavengers and associated benefits of being a Free RPG Day GM. Having started the day with a glorious pork belly and maple syrup pancakes crowned with a fried egg. 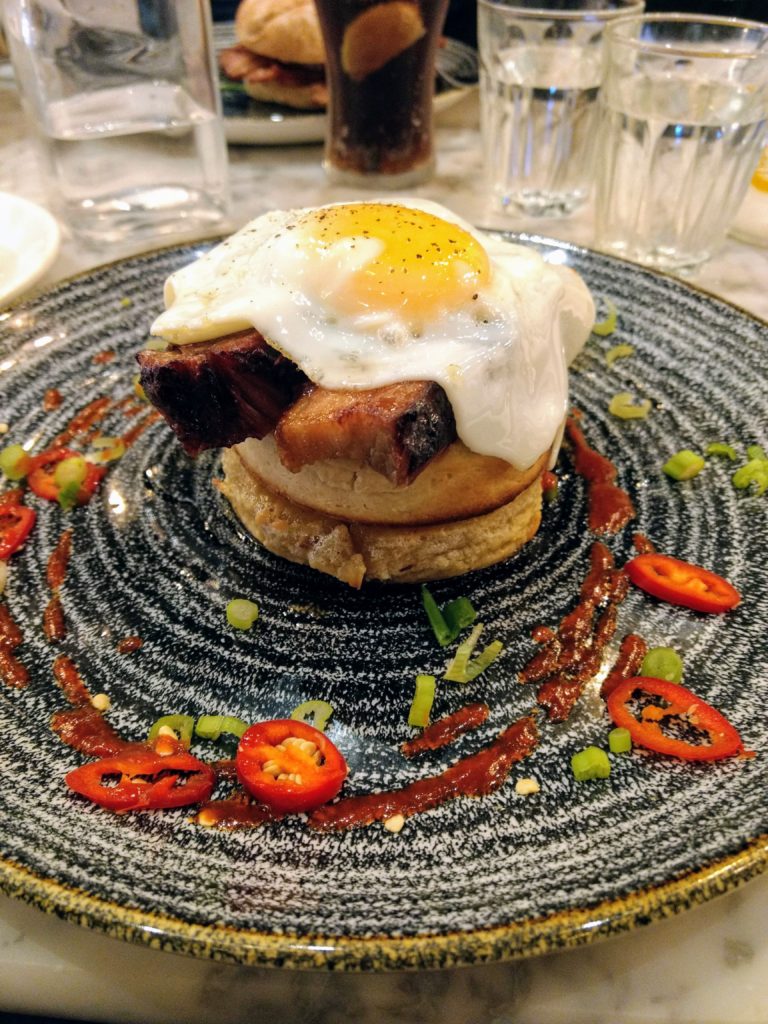 (Seriously, glorious isn’t quite up to the task of describing the experience… When I originally saw Fress from the outside, I joked as to whether they had a dress code. Black and white tiling, gilt decoration, cabinets filled with cakes that demanded attention even at 9am. Cocktail bar and kitchen, I wish this place every success and if you’re up for an incredible and a moderately priced breakfast, head to 62 Oldham St, Manchester M4 1LE and enjoy.)

I managed to get hold of a copy of Scritch Scratch at the end of running a 5-hour game of Delta Green/Cthulhu Hack – and it was the last copy left. Very last. Sort of hidden away and might not have been picked up at all if I hadn’t have been asking for it last.

Nice thing about this one – the lovely matte cover with that sort of velvety touch. Very nice cover art.

To those looking at the “haul” and wondering whether there’s anything missing – there is. Eldritch Cock is not pictured. That isn’t out of any kind of issues with it – I have none. As ever, James Raggi has rolled out the big guns and offered a Free RPG Day that places ever other contribution in the shade in production terms. A neat hardback brimming with colour and black/white illustrations throughout.

No… the reason why it isn’t picture is simply because Fil Baldowski, my dear wife, seems to have banked this as her own personal score from the day. I may never see it again.

The first Cthulhu-based contribution, Scritch Scratch by Lynne Hardy, almost scores as a full-on Quickstart package. You have an adventure and pre-generated characters in Scritch Scratch, but no rules.

I mean I know that CoC is a d100 roll on most things, so most folk might pick that up from the character sheets without worrying too much about the nuances. You get a note and a link that the Quickstart rules themselves can be downloaded from online and that you need this, or the actual rules, to make full use of the adventure. It seems to me that a brief introduction might have been achievable in a couple of pages and made this a genuine Quickstart package.

The modern day adventure comes with modern day pre-gens, along with a fair scattering of illustrations and maps throughout.

Fifty gold stars to Gareth Ryder-Hanrahan and Pelgrane Press for A Cable’s Length from Shore and On a Bank by Moonlight. Gar is a writing machine, as ever; he authored both adventures in this chunky volume.

Not only do you get two adventures and pre-gen characters for both, but you do get a separated potted GUMSHOE explanation section in the middle, cards for the Cthulhu Confidential investigation and it just oozes a sense of money spent on a solid intro. Of all the things I picked up yesterday, this is the one that deserves your avid attention to grab a copy if you didn’t. This feels very much like the sort of supplement that you would have paid money for without a moments pause – it has heft, both page count and actual content, with two full-on adventures and, in the case of The Fall of Delta Green, six pre-generated characters.

All of the Cthulhu focused adventures could have been read and run on the day by a Keeper up for the challenge and willing to either scratch out rough versions of the characters or rip them out of the book.

Numenera’s Ashes of the Sea by Sean K Reynolds contains an adventure at the front and an overview of the rules at the back. In between, you get four new full-page creatures for the Ninth World with illustrations (well, I’m guessing they’re new and not taken from one of the Bestiary volumes… I could be wrong).

The back inner page gives you a link to Resources online, including characters. Therefore, you would need to make a little extra effort to have run it on the day, but still possible with scratch paper and an Internet link.

Overlight is a sketchier approach to introductions, which is a shame. A world of seven giant island nations floating in the sky over an endless sparkling ocean, bathed in the ever present Overlight. You have an introduction to the principles of the game, a brief bit of background, and an adventure, The Birthright of Khar-Ulan, a rescue mission to retrieve stolen bat-pups in order to save the life of a merchant friend – but there are no characters and no explanation of the system.

Effectively this feels like an extra booklet that someone picking up the game might have use for – but it isn’t of immediate use on the day because that (KIckstarted) book isn’t available. I can’t work out whether the Free RPG Day booklet might have been part of the funding goal for the Kickstarter or not.

I guess you could improvise a run through the adventure with something else, like Fate. You have enough (if brief) detail about the inhabitants of the seven islands so you could sketch those out into playable sets of Aspects and Stunts – but there no enough here to run the game. The start of the adventure references that you can use the pre-gen characters from the main rules… which isn’t much use as they don’t fulfil until at least late Summer.

I didn’t get a chance to see much else of the books as I spent 5-hours running a game of Delta Green with The Cthulhu Hack rules in the afternoon, finishing just after 6pm.

I ran Observer Effect, which I had picked up on a whim a week before from DriveThru. I wanted to run something that I hadn’t written to showcase the ease of using my games simple rule set to run adventures for other games on-the-fly.

The characters are well drawn, the information well laid out, and there’s a lot going on. I made a crib sheet of the characters with their core secrets, clues and mannerisms, along with a rough timeline of the events. I also had a sheet to keep track of the course of events, timeline and locations – because in an adventure set in a confined location it matters. Here, it matters quite a bit.

Running with The Cthulhu Hack worked well because the system vanished into the fabric behind the ongoing narrative, only emerging when threats loomed or investigation found focus. Sanity got blasted rapidly.

Comments on Twitter after the session suggested all went well – and that’s certainly the way it felt at the end of the session.

Had a great time – thanks again to Paul @cthulhuhack for running a well crafted game. Time to gather up what is left of my sanity !!

It was a game where you could could see dawning realisation throughout, pieces falling into place and wild theories brewing in their midst. Admittedly, a lot of those wild theories landed a little far from the mark, but not so far away as to put the agents completely off track.

I enjoyed running it; I especially enjoyed spouting pseudo-scientific technobabble on more than one occasion – usually ending with someone asking me to stop.

I will post more about the prep and handouts for the event at a later date. Thanks to the players for such an entertaining game and Paolo from Travelling Man for organising the event, hosted by the Flour & Flagon. 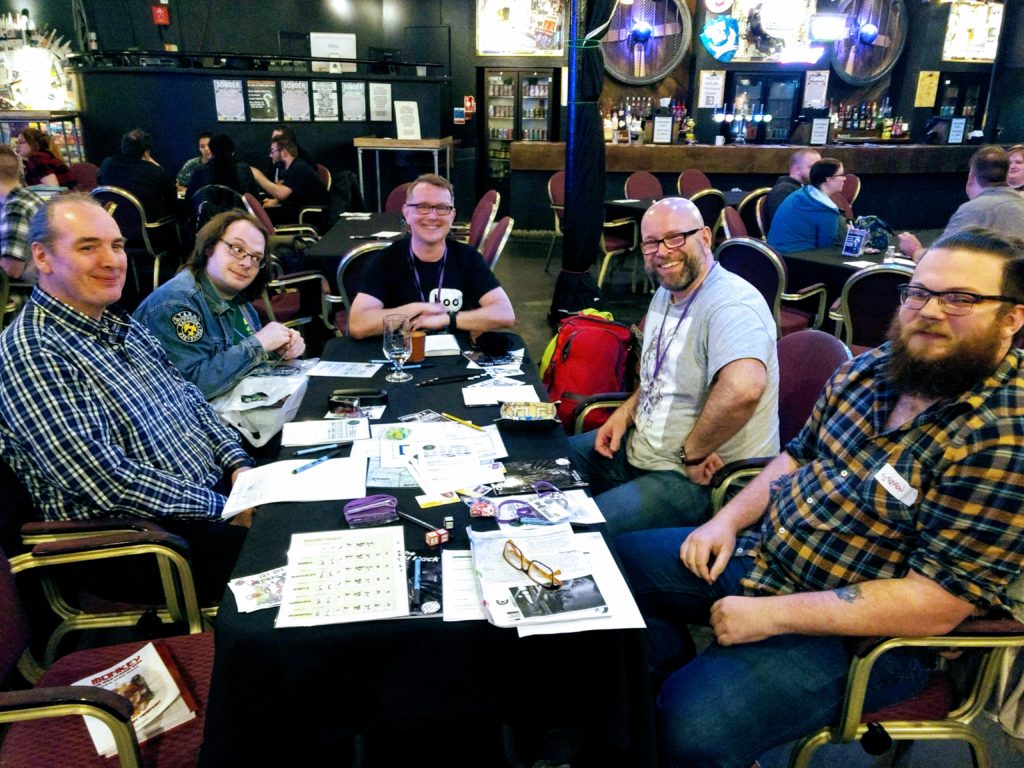