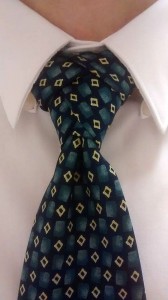 I couldn’t rightly tell you what has led to a week of new tie knots.

I think it might be something to do with feeling rather comfortable and not at all self conscious wearing a bow tie on Friday last week. Despite expectations I might feel like a bit of a ‘nana, I enjoyed wearing braces as well.

That Matt Smith has a lot to answer for in his tenure as The Doctor.

Anyway, after wearing the bow tie, I had a look online at tying ties in general and came across a site with some great pictures and step-by-step guides – How to Tie a Necktie on ties.com.

Looking through them, I realised just how unadventurous I’d been. I mean, they have eight classic necktie knots here and I have only ever done the Standard.

I declared this week Tie Week.

Monday, I started with an easy Half Windsor. Tuesday, the Kelvin.

However, for Wednesday I needed to push the boat out – and last week, when the idea first arose, we’d discussed making mid-week Eldredge Wednesday.

Invented in 2007, by John Eldredge, this is a fiendish looking knot. But stylish. Very stylish.

Last night, I spent half an hour picking through my ties and going for trial runs. What I found was that I really don’t have enough plain, light coloured, silk ties. I have no doubt that these would be best for a pretty stunning Eldredge.

I made do with a patterned green/blue tie – and while the knot worked out OK, it loses something in the midst of the pattern. It’s a shame, but it is a great knot. I will definitely do this again – and silk ties will certainly be high on my Christmas list.