An Afternoon of Board Games

An Afternoon of Board Games 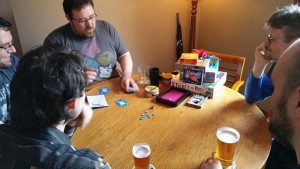 I’m not a gamer that enjoys all games. I actually appreciate new games better if I have had the chance to at least cast a cursory gaze across the rules. Or, I can just about manage if I play a game with someone explaining the rules – providing they know the rules from back to front and have real confidence in their explanations.

I struggle to participate, because if I don’t understand the basics of the games, I quickly lose all grasp of what’s happening and quietly slip away into the oblivion of knowing I’m going to lose horribly. And, that I’m not going to enjoy the process at all.

And, I struggle to find cause to try another game. Not enjoying one tends to chip away at my will to participate. I have a weak enough drive to get involved to begin with, being quite an introverted fellow in the company of strangers. Throw me into a unfamiliar setting with new people and an ill-explained game – and I’m pretty much casing the exits for an escape route. 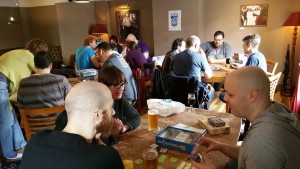 As it happens, the Travelling Man organised gaming event I attended on Sunday afternoon handled my issues with aplomb.

Organised very capably by Haroon Mushtaq, manager of the Manchester store, this inaugural event proved to be well attended and a good way to spend a few hours. The Port Street Beer House provided a comfortable function room (upstairs from the main bar area), in an accessible part of central Manchester with plenty of parking. For those with a taste for good bottled beer and cask ales, it sounded well stocked with tasty drink.

While I originally volunteered to assist with games, I had focussed on roleplaying – which I might yet try out at a future event. Instead, I took a bit of a back seat and participated instead.

The main master of games for my table was the amiable and knowledgeable ‎André, who knew his stuff – or could at least bluff the 10% he’d forgotten and apologize when recollection dawned. We played a bunch of games I hadn’t played before and I generally felt comfortable enough. I found the game explanations spot on and while I did struggle a little, the gathered players proved keen and supportive.

We juggled a few players in and out of the table, making it possible to try a few games with differing player numbers, including a couple of 7-player games. Amongst those tried were:

Hanabi (co-operative card game about organising a firework display),
Avalon (Arthurian bluffing game – and in playing two games I ended up being Merlin twice),
Masquerade (fantasy bluffing card game),
Gravwell (a boardgame about escaping from a black hole by pushing and pulling at the mass of derelicts and competing ships)
Tsuro of the Sea (tile-based survival boardgame), and
Snake Oil (family-friendly game of improvised salesmanship to card-randomised customers)