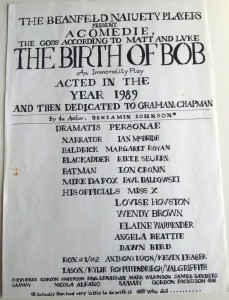 Twenty four years ago, I helped write and performed in a Christmas pantomime at school. We performed it in the Sixth Form Common Room to an audience of students and teachers.

Embarrassingly, I had taken on some of the writing duties, but utterly blanked. In the end, I ripped off a bit of Python and hoped no one would notice. It might have been 20 years since the Pythons performed those sketches, but I’m sure someone in the audience noticed, especially amongst the teachers. Not sure why I fell foul of blank brain on that occasion.

We had performed for Comic Relief the previous year, and did a pantomime at Christmas – performed in the library on that occasion, I think. For Comic Relief, I had played the Pete Cook role in the One-Legged Tarzan sketch, to Ian Berridge’s Dudley Moore unidexter. I have to admit to enjoying that first performance and managed to remember most of my lines. I must have studied them for hours, as elements of that sketch remain burned into my brain to this very day (“I have nothing against your right leg. The trouble is, neither have you.”).

I would like to think my life might have taken a different path if I’d kept to the business of performing. Maybe I would have gotten into the theatre, or television, or something else of that ilk. I pursued a line of study in the Arts, but – then again – I also pursued a relationship at the time as well that took up rather a lot of my time and attention. Having helped to write the first pantomime, I failed to turn up for it due to… other commitments.

In the wake of the 25th anniversary of Comic Relief in mid-March, I came across this poster advertising the performance of the second pantomime, hand drawn by my good self. I have continued to maintain a crafty edge in hand writing stuff like this, with a neat hand-writing style I probably owe to someone else as well.

At school, I never did seem to shine alone – always as a pair or in a crowd. For Comic Relief, I managed to stand on my own two feet (unlike Mr Spiggott) and carried off a decent enough part. However, side-tracked and focussed elsewhere, nothing ever came of it – and there isn’t much point imagined what might have been.

Still, there have been plenty of big name actors who didn’t pursue their dream until their middle age, right?